3D
Scan The World
2,638 views 96 downloads
Community Prints Add your picture
Be the first to share a picture of this printed object
0 comments

"Nola is an ancient Campanian town and a modern municipality in the Metropolitan City of Naples in Italy. It lies on the plain between Mount Vesuvius and the Apennines. It is traditionally credited as diocese that introduced bells to Christian worship. Illegal dumping of toxic wastes by the Camorra, however, has turned the surrounding area into a "Triangle of Death", with cancer rates far above the European average.

Nola was one of the oldest cities of Campania, with its most ancient coins bearing the name Nuvlana. It was later said to have been founded by the Ausones, who were certainly occupying the city by c. 560 bc. It once vied in luxury with Capua. During the Roman invasion of Naples in 328 bc, Nola was probably occupied by the Oscans in alliance with the Samnites. Amid theSamnite War, the Romans took the town in 311 bc.

Under Roman rule, the city was the site of the 1st, 2nd, and 3rd Battles of Nola during Hannibal's invasion of Italy amid theSecond Punic War. On two occasions (215 and 214 bc), it was defended by Marcellus. It fell by treason to the Samnites during the Social War. They held it until their ally Gaius Marius was defeated by Lucius Cornelius Sulla, who subjugated it with the rest of Samnium in 80 bc. It was stormed by Spartacus during his failed slave revolt. The emperors Augustus died there on 19 August ad 14. He and Vespasiansettled colonies in the area. In the Roman road network, Nola lay between Capuaand Lower Nocera on the Via Popilia. A branch road ran from it to Abella andAvellino. Though a relative backwater, Nola retained its status as a municipium, its own institutions, and the use of the Oscan language. It was divided into pagi, the names of some of which are preserved: Pagus Agrifanus, Capriculanus, Lanitanus. The discoveries of the pavement of the ancient city have not been noted with sufficient care to recover most of the plan, but a large number of Grecian vases were made at Nola, using its fine yellow clay and a shining black glaze. They are decorated with red figures." 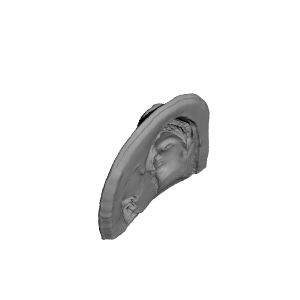 ×
0 collections where you can find Antefix (tile-end) with a female head nr2 at The British Museum, London by Scan The World