Female head, modeled from the Aphrodite of Cnidus at The Louvre, Paris

3D
Scan The World
5,365 views 405 downloads
Community Prints Add your picture
Be the first to share a picture of this printed object
0 comments

Female head, modeled from the Aphrodite of Cnidus at The Louvre, Paris

Among the many copies inspired by the Aphrodite of Cnidus, this head from the former Kaufmann Collection is a Hellenistic-era creation. It is distinguished by its grace and delicacy. The sculptor freely adapted Praxiteles' masterpiece of the mid-fourth century BC, without altering either its religious nobility or its sensuality. The goddess performs her ablutions completely naked, an audacious and novel treatment of the subject.

This head of Aphrodite was discovered at Tralles in Asia Minor circa 1885. It takes its current name from the Kaufmann Collection, where it was preserved until it was purchased by the Louvre in 1951. A fragment from the same statue, depicting the pelvis and upper thighs, is in the collections of the Staatliche Museen in Berlin. The "Kaufmann Head" is one of a great many copies that were made of the Aphrodite of Cnidus in the Hellenistic and Imperial periods. The slight tilt to the left, the chignon, and the treatment of the hair in waves divided equally on either side of a central part are fairly similar to other Roman heads in the vicinity of this piece. The head is distinguished by its grace and gentleness, and there are no trepan lines in the working of the hair - these clues allow us to date this work to the Hellenistic period.

More than a simple copy, this marble head from the Kaufmann Collection offers us an original creation from the second century BC. The sculptor has taken several liberties with the famous statue created by Praxiteles, an Athenian sculptor of the mid-fourth century BC, without altering either the goddess's religious nobility or her sensuality. He or she has accented the length of the neck and noticeably lengthened the face's delicate oval. The sculptor has also changed the arrangement of the ribbons holding the hair: here the two ribbons are parallel, while on other copies they diverge. Aphrodite thus appears more tentative and fragile, but both the memory of the subject and the style of Praxiteles's creation remain, particularly in the sfumato effect emanating from the face.

In the fourth century BC, the citizens of Cnidus, a small city-state on the southern coast of Asia Minor, placed the Aphrodite of Praxiteles in the heart of the temple dedicated to her. Viewers were struck by the boldness of the subject - the first large-scale Greek statue to depict the female nude - as well as the quality of its execution. The statue depicts the goddess surprised in her bath by an intruder, at a moment when she is completely naked, performing her ritual ablutions. The image, which has a highly religious meaning, was frequently copied thereafter, perhaps more from a decorative point of view than a religious one.

This print is made on MakerBot Replicator Fifth Generation. The dimension of the model 60mm x 75mm x 100mm, Infill 10%, with support and layer high 0,2. Provides very nice results! 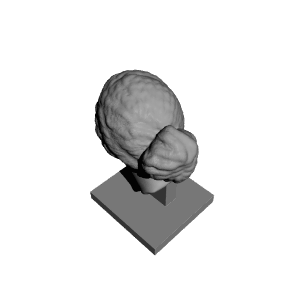 ×
0 collections where you can find Female head, modeled from the Aphrodite of Cnidus at The Louvre, Paris by Scan The World