3D
Scan The World
1,142 views 64 downloads
1 collection
Community Prints Add your picture
Be the first to share a picture of this printed object
0 comments

During the last quarter of the first century A.D. and the early decades of the second century A.D., ever more complex hair arrangements were developed for the ladies of the imperial court. Hairpieces with added hair and concealed frameworks formed high diadem-like structures surrounding the face. One of the most elaborate constructions appears on the official portraits of Marciana, the elder sister of Trajan. The high polish and engraved eyes on this head suggest that it was carved during the Hadrianic period. The powerful women of Trajan’s family were much honored by his successor, Hadrian, who is said to have owed his throne to their influence. Marciana was the grandmother of Hadrian’s wife, Sabina. 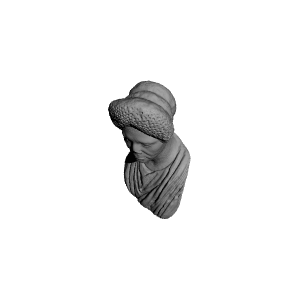