3D
Scan The World
2,662 views 152 downloads
Community Prints Add your picture
Be the first to share a picture of this printed object
0 comments

Fritz Wotruba (April 23, 1907 in Vienna – August 28, 1975 in Vienna) was an Austrian sculptor of Czecho-Hungarian descent. He was considered one of the most notable sculptors of the 20th century in Austria. In his work, he increasingly dissolves figurative components in favor of geometrical abstraction with the shape of thecube as the basic form. From 1921 to 1925, he was trained as an engraver, as an apprentice in the engraving and die cutting workshop of Josef Schantin in Vienna. In 1926, he attended the arts and trades school of the Austrian Museum of Art and Industry and open evening courses on nude drawing.

In fall 1926, he enrolled in studies in sculpting at the arts and trades school. Through the end of his studies, he was a student of Anton Hanak, and received a stipend by the Vienna Society of Modern Art, the Austrian Chamber of Labor and the municipality of Vienna - which was obtained for him by the ministrations of Anna Mahler, who was his pupil and lover. In 1933, he had a studio under the Stadtbahn, or Metro Rail Tracks. Canetti :"..it consisted of two big vaults supporting the Stadtbahn trestle; in one stood figures that would have got in his way while he was working in the other. When the weather wasn't too bad, he liked best to work in the open..." He continued to live at home with his widowed mother and his youngest sister in their old home in 31 Florianigasse, where he had been born, until he escaped after the Anschluss and Hitler's dictatorship over Austria to Switzerland for the duration of the war.

Probably his greatest work, on which he worked until his death, was the planning of the Church "of the Holy Trinity" in Mauer, Vienna, better known as Wotruba Church. He did not live to see the completion of the church in 1976. Many of his statues can be seen in public parks in Vienna. The Lying Adolescent is located in an exhibition in theAlbertina. He escaped to Switzerland upon Hitler's ascent to power. A number of his sculptures were either lost or destroyed during the Second World War. In 1947, Wotruba was awarded the City of Vienna Prize for Visual Arts and in 1955, he received the Grand Austrian State Prize for Visual Arts. He is buried on the Zentralfriedhof (Central Cemetery) in Vienna, Austria. 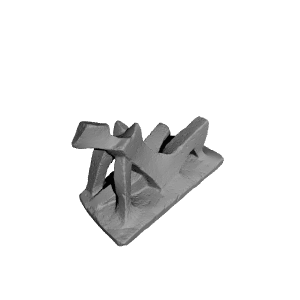 ×
0 collections where you can find Female Rock at the Middelheim Museum, Antwerp by Scan The World