3D
Scan The World
2,323 views 68 downloads
Community Prints Add your picture
Be the first to share a picture of this printed object
0 comments

This single block carving of polychrome wood shows a slender female form. The carving highlights her long flowing robes, with long sleeves that cover the hands, but which appear clasped at the waist. Shinto deities were rarely represented in art until the foreign Buddhist faith, first introduced in the sixth century, gradually began to stimulate the rival production of paintings and images. Imagery, however, never became a dominant aspect of Shinto worship. Because of the lack of iconography, pieces of this sort are very difficult to identify. 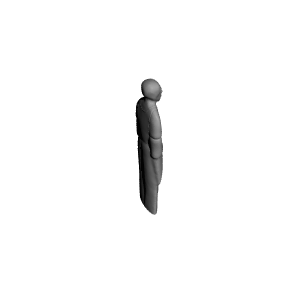 ×
0 collections where you can find Female Shinto Deity at the UEA, Norwich, UK by Scan The World