3D
Scan The World
1,477 views 51 downloads
Community Prints Add your picture
Be the first to share a picture of this printed object
0 comments

By the end of the nineteenth century, the Royal Academy Schools had amassed an important collection of casts from the Antique. This female figure, which may represent Andromeda or Europa was acquired in 1855. It is the only original Antique sculpture in the R.A. collections.

Despite weathering and losses, the figure retains an elegance and vitality characteristic of late Classical Greek sculpture. The clinging drapery reveals a softness of form that contrasts with the athletic ideal exhibited by earlier 5th-century sculpture. The lack of modelling on the back suggests that the figure was designed to stand in an architectural niche.

Although widely attributed to Timotheus, some scholars have argued that the sculpture is a Roman copy of a Greek original. It was greatly admired by Victorian Classicists such as Sir Lawrence Alma-Tadema and others. 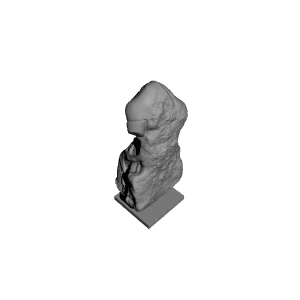