Figure of a bearded man at the Louvre, Lens

3D
Scan The World
5,182 views 444 downloads
1 collection
Community Prints Add your picture
Be the first to share a picture of this printed object
0 comments

Figure of a bearded man at the Louvre, Lens

This figure of a bearded man is a sculpture (a term*) made ​​of terracotta dating from 1548 - 1550. It was created by an unknown sculptor but its origin is known as Oiron, France .

The work was given to the Museum of Ceramics in Sèvres by Gabrielle Fillon. In 1935 it was put into storage at the Louvre, where it is part of the collections of the Department of Sculptures.

It is 115 x 39 x 30 centimeters, and originates from a niche of the courtyard of the castle of Oiron in Deux-Sèvres in France, decorated by the lord of Oiron, Claude Gouffier.

The statue represents Terminus , also named Terme, the patron deity of the terminals that delimit the fields and properties.

*Term, in the visual arts, refers to an element consisting of a sculptured figure or bust at the top of a stone pillar or column that usually tapers downward to a quadrangular base. Often the pillar replaces the body of the figure, with feet sometimes indicated at its base. The pillar itself may be a separate object (i.e., a pedestal for the head or other sculpture), in which case it is called a terminal pedestal.

The word term (an abbreviation of Terminus, the Roman name for the god of boundaries) has a long list of synonyms, including terminal figure, terminus, terminal, herma, hermes, and herm. In ancient Rome terms were placed along highways and used as boundary markers. The head or bust on a Roman term could be that of a human, an animal, or a mythical creature. The ancestor of the Roman term, the herm, was a sacred representation of the Greek god of travelers, Hermes: a sculptured bust of the god merging into the stone pillar supporting it. The most familiar form of term is that found in many Renaissance gardens, in which a detailed portrait head arises out of a simple, sculptured pillar. 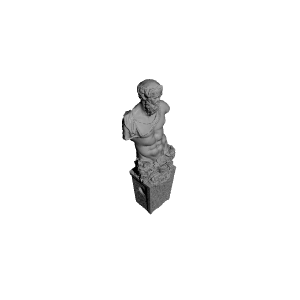 ×
1 collections where you can find Figure of a bearded man at the Louvre, Lens by Scan The World