3D
Scan The World
2,119 views 265 downloads
Community Prints Add your picture
Be the first to share a picture of this printed object
0 comments

This nobly restrained figure of a woman, from the middle of the 2nd century A.D., sontrasts with the various male Roman portrait heads in this gallery. The Dignified status of an aristocratic Lady is fully embodied in this majestic work. The body type, often found in imperial female portrait statues, is based on Greek draped figures from the 4th century B.C. Associated with the work of Late Classical sculptors such as Praxiteles or Lysippus figures of the so-called Small Herculaneum type were frequently adapted in Roman art. Here the heavily draped figure suggests the virtuous character of the commemorated woman. The potrait head used with his standard body type is graceful and pensive. The complete figure radiates a gentle nobility that embodies the best traditions of Roman family life and the high value accorded to distinguisehed Roman women.

In appearance, the lady recalls imperial Antonine women such as the younger Faustina, wife of Marcus Aurelius, though the figure is not sufficiently close to either her or her daughter, Lucilla, to be an actual royal portrait. 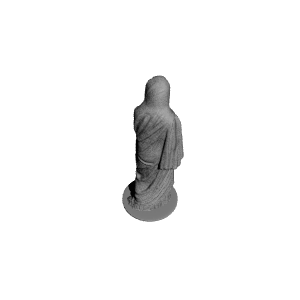