Figure of Skylla at The British Museum, London

Figure of Skylla at The British Museum, London

In Greek mythology, Scylla was a monster that lived on one side of a narrow channel of water, opposite its counterpart Charybdis. The two sides of the strait were within an arrow's range of each other—so close that sailors attempting to avoid Charybdis would pass too close to Scylla and vice versa. Scylla made her first appearance in Homer's Odyssey, where Odysseus and his crew encounter her and Charybdis on their travels. Later myth gave her an origin story as a beautiful nymph who gets turned into a monster.

The strait were Scylla dwelled has been associated with the Strait of Messina between Italy and Sicily. The idiom "between Scylla and Charybdis" has come to mean being forced to choose between two equally dangerous situations.

The origin of Scylla varies according to the author:

In the Aeneid, Scylla was a beautiful naiad who was claimed by poseidon, but the jealous Amphitrite turned her into a monster by poisoning the water of the spring where Scylla would bathe. Similarly, in Hyginus, according to whom Scylla was loved by Glaucus, but Glaucus himself was also loved by the sorceress Circle. While Scylla was bathing in the sea, the jealous Circe poured a potion into the sea water which caused Scylla to transform into a monster with four eyes and six long legs equipped with grisly heads, each of which contained three rows of sharp teeth. Her body consisted of 12 tentacle-like legs and a cat's tail, while four to six dog-heads ringed her waist. In this form, she attacked the ships of passing sailors, seizing one of the crew with each of her heads.

Easy print, put some supports and rotate 45 degrees on the x axis for better print and less supports. Printed by garagedays3d.com Printing Services. 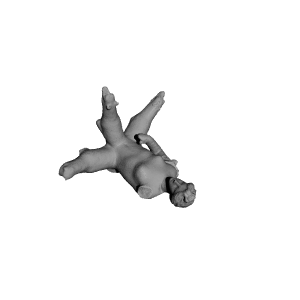 ×
2 collections where you can find Figure of Skylla at The British Museum, London by Scan The World
×
Louise Krasniewicz
@LouiseK
2
Printed on: MakerBot Replicator 2
Material: PLA
Posted at: 16th June 2019