3D
Scan The World
1,971 views 154 downloads
1 collection
Community Prints Add your picture
Be the first to share a picture of this printed object
0 comments

Removed from HMS Ganges in Chatham Dockyard and held by The Royal Naval Trophy Centre aboard HMS Nelson in Portsmouth. From here it was transferred to the NMM on 19/07/1965.
Vessel history
This was an iron-built storeship purchased by the Navy while on the stocks at Laird's, Birkenhead, in 1855 and originally named 'Resolute'. After the previous 'Resolute' -see FHD0117- was salvaged in the Arctic and returned home in 1856, this vessel was renamed 'Adventure' in 1857 and used as a troopship until broken up at Chatham in 1877.
Show more Show less
License
Technical Information
More Information
Object Parts
Remixes Add your Remix
Show more
Interesting objects for you
Show more 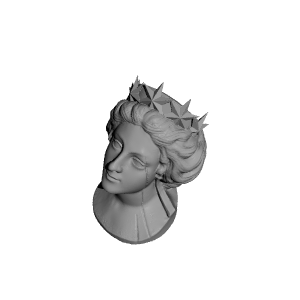