Over the years, archaeologists have uncovered many different kinds of clay figurines—dogū—dating to Japan’s prehistoric Jōmon period (14,000–300 bce)­. The most diverse forms have been excavated in northeastern Japan, where this figurine of a female was discovered. Some are seated, others standing, some have heart-shaped heads, others round and wearing headpieces, some have little or no surface decoration, and others, like this example, known as a shakōki or “goggle-eyed” type, have distinctive large eyes and are adorned with colour and complexly carved decorations. No one knows for sure how these figurines were used, but there are several theories. The prevailing theory holds that they served as talismans related to health and childbirth and that after they were used they were purposefully broken and disposed of, which may account for the fact that dogū are found with missing limbs or other seemingly purposeful breaks. 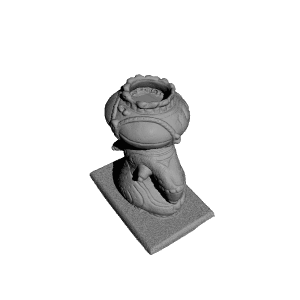 ×
7 collections where you can find Figurine of a Female by artsMIA
×
Louise Krasniewicz
@LouiseK
1
Printed on: MakerBot Replicator 2
Material: PLA
Posted at: 08th December 2022