3D
Scan The World
4,515 views 134 downloads
1 collection
Community Prints Add your picture
Be the first to share a picture of this printed object
0 comments

Almost all the critical comments of the period underline the sculptor's capability in realising the personality of the artist while designing the dome of the Cathedral. The model, rather small due to the reduced dimensions of Pampaloni's study, was admired by Thorwaldsen. The statue confirmed Pampaloni's abilities in monumental sculpture and, within the nineteenth-century cult of the memories of illustrious men, was considered the first tribute to great countrymen to be placed on a public street. 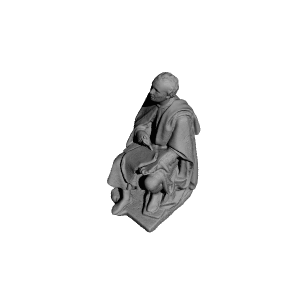