3D
360°
Scan The World
1,230 views 138 downloads
3 collections
Community Prints Add your picture
Be the first to share a picture of this printed object
0 comments

Like many prominent Florentines, Filippo Strozzi (1428-1491) had his portrait made in marble. Inscriptions on the marble bust in the Louvre confirm Filippo as the sitter and the Florentine sculptor Benedetto da Maiano as the artist. Benedetto appears to have routinely made terracotta models in preparation for his marble sculptures. The Louvre bust and its model, now in Berlin, represent the earliest surviving instance of a terracotta and the finished marble. Their juxtaposition provides insight into both the sculptor's working methods and the nature of fifteenth-century Florentine portrait sculpture.

In the terracotta bust, Filippo turns his head to the right. Peculiarities such as the mole beside the nose individualize his physiognomy. The body is disproportionate to the head, indicating that the two sections were modeled separately. The body was presumably a workshop piece, while the head would have been modeled by the master.

Where the terracotta model is concerned with capturing psychological expression, in the marble the artist paid greater attention to physiognomic and clothing details. Here, Filippo faces forward, his gaze just right of centre. His mature features confer a certain gravity of character. The enlarged torso is erect and imposing. 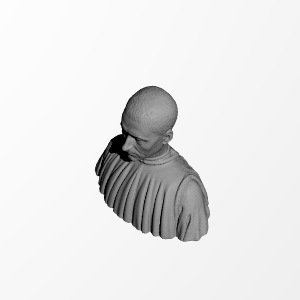