3D
Scan The World
2,385 views 185 downloads
Community Prints Add your picture
Be the first to share a picture of this printed object
0 comments

24-year-old Bourdelle created this statue after arriving in Paris just a year earlier. He submitted the plaster version of Première Victoire d’Hannibal (First Victory of Hannibal) to the Salon of French Artists, choosing as his subject a youthful figure of the future Carthaginian general. Even though he was only young, Hannibal grabbed hold of an eagle, suffocating it against his chest to end a bitter, difficult fight. Although he would soon alter its shapes, Bourdelle carefully depicted the episode in this work, attempting to faithfully recreate the eagle’s anatomy as well as the victorious gesture of the young man. Such virtuoso naturalism would earn him a mention honorable at the Salon.

The statue currently stands in the Musee Bourdelle in Paris, whcih used to be the Artist's studio. 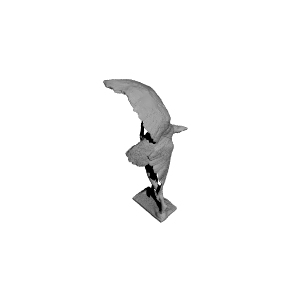