Flask 2 at The British Museum, London

3D
Scan The World
1,828 views 71 downloads
1 collection
Community Prints Add your picture
Be the first to share a picture of this printed object
0 comments

Flask 2 at The British Museum, London

The Liao dynasty, also known as the Khitan Empire and the Liao Empire, was an empire in East Asia that ruled over Mongolia and portions of the Russian Far East, northern Korea, and northern China properfrom 907 to 1125.  The Liao dynasty was founded by Abaoji, Khagan of the Khitan people around the time of the collapse of Tang China. It was the first state to control all of Manchuria. Almost immediately after its founding, the Liao dynasty began a process of territorial expansion, with Abaoji leading a successful conquest of Balhae. Later emperors would gain the Sixteen Prefectures by fueling aproxy war that led to the collapse of the Later Tang (923–936) and would establish tributary relationships with Goryeo and Song China after failing to conquer Goryeo. The influence of the Liao dynasty on subsequent culture includes a large legacy of statuary art works, with important surviving examples in painted wood, metal, and three-color glazed sancai ceramics. The music and songs of the Liao dynasty are also known to have indirectly or directly influenced Mongol, Jurchen, and Chinese musical traditions. 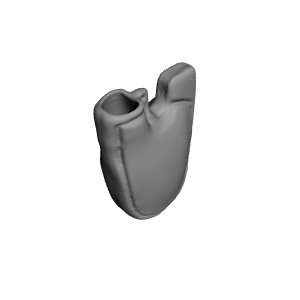 ×
1 collections where you can find Flask 2 at The British Museum, London by Scan The World