3D
Scan The World
3,754 views 340 downloads
3 collections
Community Prints Add your picture
Be the first to share a picture of this printed object
0 comments

This is a marble sculptural group commissioned in 1565 by Prince Francesco de’ Medici as a pendant to Michelangelo’s Victory, which had been presented to the Medici by Michelangelo’s nephew and heir following the master’s death the previous year. The two marbles were intended to be displayed together in the Salone del Cinquecento of the Palazzo Vecchio at the festivities of Francesco’s marriage to Joanna of Austria in December that year. However, there was insufficient time even for the marble block to be chosen and transported from the quarry and instead, the full-sized clay (gesso) model (currently in the Palazzo Vecchio, Florence) was substituted for the final work, which was not completed until 1570. 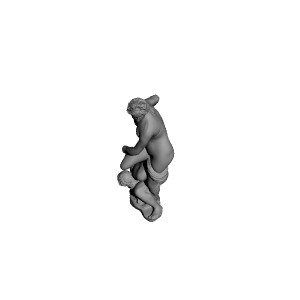