3D
360°
Scan The World
3,247 views 202 downloads
2 collections
Community Prints Add your picture
Be the first to share a picture of this printed object
0 comments

For many New Guinea peoples, flutes are, or were, among the most sacred and important of all musical instruments. Sacred flutes were often made from hollow cylinders of bamboo and played, like a Western flute, by blowing through a hole in the side of the instrument near the upper end. The tops of side-blown flutes were frequently sealed with ornamental flute stoppers. Some of the finest flute stoppers were made by the Biwat people of the Yuat River in northeast New Guinea. Biwat flute stoppers typically portray stylized human images with small bodies and large heads with extremely high domed foreheads. Although they depict human figures, the stoppers adorned ashin, flutes associated with crocodile spirits. Ashin flutes were used, in part, during initiation rites in which novices crawled into the mouth of a large crocodile effigy to be cut by its teeth. The teeth, actually sharp implements wielded by the initiators, made cuts that healed into permanent scarification patterns on the novices’ bodies, marking them as initiated individuals.

Scanned at The Oceania Exhibition at The Royal Academy (Sept - Dec 2018). 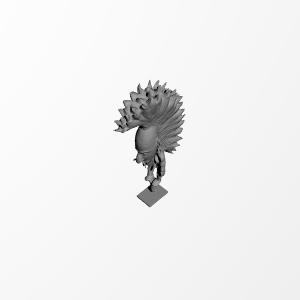