3D
360°
Featured Scan The World
2,328 views 80 downloads
Community Prints Add your picture
Be the first to share a picture of this printed object
0 comments

Along with its counterpart (A.2-1913), this larger-than-life sculpture once formed part of a Spirit Way, with two roys of facing figures and animals leading to a tomb. When the figures arrived at The V&A they were described as Korean, since Korean noblemen wore similar wide-brimmed horsehair hats. However, the combination of Korean headwear with Chinese robes is not known elsewhere, so instead the official probably represents a generic foreign envoy. He is presenting a casket that might be a container for a gift or document. 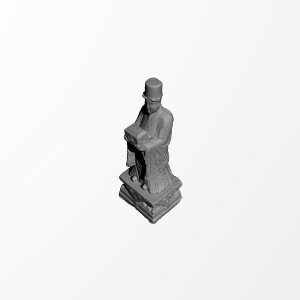