3D
360°
2,452 views 159 downloads
8 collections
Community Prints Add your picture
Be the first to share a picture of this printed object
1 comments

The modern city of Larache in Morocco is located in the Atlantic coast, between Tangier and the country capital Rabat. It was originally founded by Phoenicians as a trading post in the mouth of the Lukkus river in the 7th Century. Later, it became a Roman city named Lixus.

From the late 1400's onwards, the port and its fort changed hands several times between the local muslim rulers, the Portuguese, the Spanish, the French, and even the Barbary Pirates; as the harbor and river mouth were valuable strategic locations for commercial and military purposes.

Today, Fort Al Kabibat is poularly known as Stork's Castle (château de la cigogne). It is well-maintained and serves as a public park (from Starforts.com).

MiniWorld 3D is excited to bring this historical model to life as a homage to all the people of Larache. This model was designed by collaborator Alejandro Castillo Irigaray aka El Gordo Maker. Please give credit, it's all about spreading culture and education!

MiniWorld 3D is a collective of 28+ artists creating the best free library of 3D printable models of landmarks of the world! 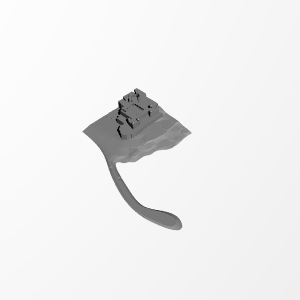 ×
8 collections where you can find Fort Al Kabibat - Larache, Morocco by MiniWorld