3D
Scan The World
3,056 views 263 downloads
Community Prints Add your picture
Be the first to share a picture of this printed object
0 comments

This sandstone depicts Fortuna, the goddess of fortune and the personification of luck in Roman religion. Fortuna is often depicted with a gubernaculum (ship's rudder), a ball or Rota Fortunae (wheel of fortune) and a cornucopia (horn of plenty). She might bring good or bad luck: she could be represented as veiled and blind, as in modern depictions of Lady Justice, and came to represent life's capriciousness. She was also a goddess of fate: as Atrox Fortuna, she claimed the young lives of the princeps Augustus' grandsons Gaius and Lucius, prospective heirs to the Empire. (In antiquity she was also known as Automatia.)

Fortuna's father was said to be Jupiter and like him, she could also be bountiful (Copia). As Annonaria she protected grain supplies. June 11 was sacred to her: on June 24 she was given cult at the festival of Fors Fortuna 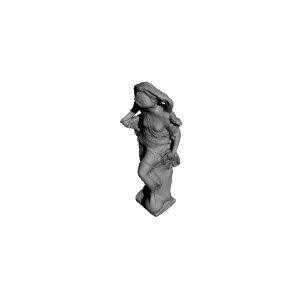 ×
0 collections where you can find Fortuna by Scan The World