Founder of the doctrine of Evolution at Jardin des Plantes, Paris

3D
Scan The World
2,377 views 105 downloads
Community Prints Add your picture
Be the first to share a picture of this printed object
0 comments

Founder of the doctrine of Evolution at Jardin des Plantes, Paris

This is a sculpture of Jean-Baptiste Lamarck in the Jardin des Plantes, Paris. The inscription reads, "A Lamarck / Fondateur de la doctrine de l'evolution" (In honour of Lamarck / Founder of the doctrine of evolution). Jean-Baptiste Pierre Antoine de Monet, Chevalier de Lamarck (1 August 1744 – 18 December 1829), often known simply as Lamarck (/ləˈmɑrk/;[1] French: [lamaʁk]), was a French naturalist. He was a soldier, biologist, academic, and an early proponent of the idea that evolution occurred and proceeded in accordance with natural laws. He gave the term biology a broader meaning by coining the term for special sciences, chemistry, meteorology, geology, and botany-zoology. 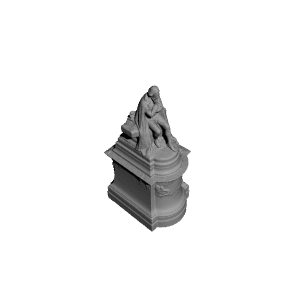 ×
0 collections where you can find Founder of the doctrine of Evolution at Jardin des Plantes, Paris by Scan The World