Fountain at The Museum of Modern Art, San Francisco

Fountain at The Museum of Modern Art, San Francisco

Fountain is one of Duchamp's most famous works and is widely seen as an icon of twentieth-century art. The original, which is now lost, consisted of a standard urinal, laid flat on its back rather than upright in its usual position, and signed 'R. Mutt 1917'. The Tate's work is a 1964 replica and is made from glazed earthenware painted to resemble the original porcelain. The signature is reproduced in black paint. Fountain is an example of what Duchamp called a 'readymade', an ordinary manufactured object designated by the artist as a work of art. It epitomises the assault on convention and good taste for which he and the Dada movement are best known.

The idea of designating such a lowly object as a work of art came from a discussion between Duchamp and his American friends the collector Walter Arensburg and the artist Joseph Stella. Following this conversation, Duchamp bought an urinal from a plumbers' merchants, and submitted it to an exhibition organised by the Society of Independent Artists. The Board of Directors, who were bound by the constitution of the Society to accept all members' submissions, took exception to the Fountain and refused to exhibit it. Duchamp and Arensburg, who were both on the Board, resigned immediately in protest. An article published at the time, which is thought to have been written by Duchamp, claimed, 'Mr Mutt's fountain is not immoral, that is absurd, no more than a bathtub is immoral. It is a fixture that you see every day in plumbers' shop windows. Whether Mr Mutt with his own hands made the fountain has no importance. He CHOSE it. He took an ordinary article of life, placed it so that its useful significance disappeared under the new title and point of view - created a new thought for that object.' 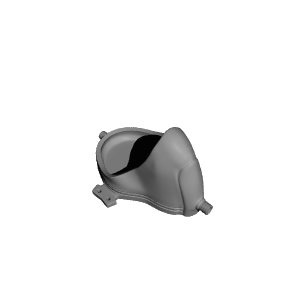 ×
15 collections where you can find Fountain at The Museum of Modern Art, San Francisco by Scan The World
×
Joe Magdalena
@joemag
2
Printed on: Anycubic i3 Mega
Material: PLA
Posted at: 20th October 2020