3D
Scan The World
1,926 views 75 downloads
Community Prints Add your picture
Be the first to share a picture of this printed object
0 comments

The basin is a copy of the original in the Museum of Fine Arts in Ghent The Fountain with Kneeling Youths is undoubtedly Minne's most famous statues. Five identical, introverted, naked young men are kneeling on the edge of a basin. Following Rodin Shadows used Minne here the ancient technique of repetition. The decorative rhythm gives the work a certain lightness, whilst reinforcing the expression. The fragile young figures, executed in a simple linear form language, expressing feelings of loneliness and longing. The figure of the young man kneeling at the water recalls the myth of the demigod Narcissus, who falls in love goes on its mirror image and substance to the desire for the unattainable object of his love. In Minne's sketchbooks we meet for studies related to the "Source of Life", as can be seen on the Ghent Altarpiece by the brothers Van Eyck. This also justifies a more religiously tinged interpretation of the fountain. The concept of it dates from 1898. Minne makes several versions in plaster, marble and bronze. In 1900, the German collector Karl Ernst Osthaus commissioned a marble version which is now in the Folkwang Museum in Essen. The Fountain with Kneeling Youths from the Museum of Ghent is the only surviving plaster model. Until the end of his life was in the studio of the artist. The bronze groups from the thirties which are found in the center of Ghent and in the yard of the parliament building in Brussels, his rejoinders devised by Minne itself. They are consistent with the prevailing Art Deco style and miss the simplicity of line and the tight geometric nature of the first draft. The kneeling in the version of the Ghent museum originated c.1905; pelvic Minne about conceives 1927-1930. 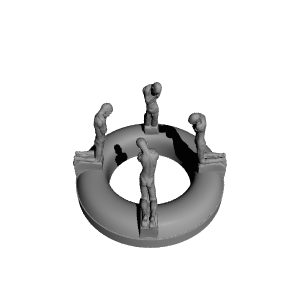