3D
360°
Scan The World
1,240 views 58 downloads
2 collections
Community Prints Add your picture
Be the first to share a picture of this printed object
0 comments

This fragment, which presumably belonged to a frieze, presents an anthemion decoration. The anthemion was a design consisting of a number of radiating petals, developed by the ancient Greeks from the Egyptian and Asiatic form known as the honeysuckle or lotus palmette. It was used widely by the Greeks and Romans to embellish various parts of ancient buildings.

The surface is partly polished in the back, the rest is partly treated with the hammer and, for smaller details, worked with the chisel. 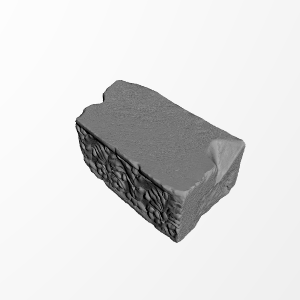