Roman art was mostly influenced by classical and Hellenistic Greek art and culture. However, they developped many aspect of this culture and made their own innovations. One striking example is the monumental art and the giant statues and sculptures they produced. This fragment of a female foot illustrates this evolution perfectly: most of these giant statues were representing gods or Emperors – the size was a sign of nobility of the subject. In this respect, we may assume that this foot used to belong to the statue of a goddess. 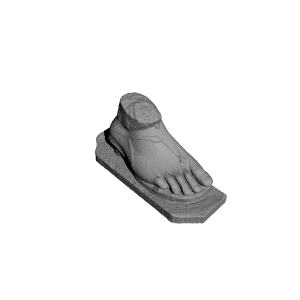 ×
1 collections where you can find Fragment of a female foot by Scan The World
×
Bob Saint-Clar
@FlyingWaffle
1
Printed on: Creality Ender 3
Material: PLA
Posted at: 17th May 2022
Loading comments...