3D
360°
Featured Scan The World
1,730 views 48 downloads
Community Prints Add your picture
Be the first to share a picture of this printed object
0 comments

A left, the remains of the frame of a door, to three crowns, Their presence is explained by the inscription, on this fragment as well as on an aufre, known thanks to a copy, but found only in 1933. The owner of the tomb began his career with the archives and treasury of the State , to be crowned then agoranome and strategist by the council and the people, as indicated by the Brussels fragment. Lastly, the gerontia, the college of old men, awarded a crown to the deceased, for having built, beside the market of which he was formerly responsible, the public weighing, which was joined by a bureau of weights and measures. 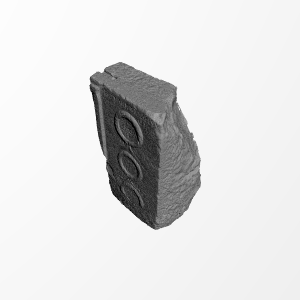 ×
0 collections where you can find Fragment of a stele-door by geoffrey.marchal