3D
Scan The World
2,543 views 91 downloads
Community Prints Add your picture
Be the first to share a picture of this printed object
0 comments

Dionysus (/daɪ.əˈnaɪsəs/; Greek: Διόνυσος, Dionysos) is the god of the grape harvest, winemaking and wine, of ritual madness, fertility, theatre and religious ecstasy in ancient Greek religion and myth. Wine played an important role in Greek culture, and the cult of Dionysus was the main religious focus for its unrestrained consumption. He may have been worshipped as early as c. 1500–1100 BC by Mycenean Greeks; traces of Dionysian-type cult have also been found in ancient Minoan Crete. His origins are uncertain, and his cults took many forms; some are described by ancient sources as Thracian, others as Greek. In some cults, he arrives from the east, as an Asiatic foreigner; in others, from Ethiopia in the South. He is a god of epiphany, "the god that comes", and his "foreignness" as an arriving outsider-god may be inherent and essential to his cults. He is a major, popular figure of Greek mythology and religion, becoming increasingly important over time, and included in some lists of the twelve Olympians, as the last of their number, and the only god born from a mortal mother. His festivals were the driving force behind the development of Greek theatre.

The earliest cult images of Dionysus show a mature male, bearded and robed. He holds a fennel staff, tipped with a pine-cone and known as a thyrsus. Later images show him as a beardless, sensuous, naked or half-naked androgynous youth: the literature describes him as womanly or "man-womanish". In its fully developed form, his central cult imagery shows his triumphant, disorderly arrival or return, as if from some place beyond the borders of the known and civilized. His procession (thiasus) is made up of wild female followers (maenads) and bearded satyrs with erect penises; some are armed with the thyrsus, some dance or play music. The god himself is drawn in a chariot, usually by exotic beasts such as lions or tigers, and is sometimes attended by a bearded, drunken Silenus. This procession is presumed to be the cult model for the followers of his Dionysian Mysteries. Dionysus is represented by city religions as the protector of those who do not belong to conventional society and he thus symbolizes the chaotic, dangerous and unexpected, everything which escapes human reason and which can only be attributed to the unforeseeable action of the gods.

He is also known as Bacchus (/ˈbækəs/ or /ˈbɑːkəs/; Greek: Βάκχος, Bakkhos), the name adopted by the Romans and the frenzy he induces is bakkheia. His thyrsus, sometimes wound with ivy and dripping with honey, is both a beneficent wand and a weapon used to destroy those who oppose his cult and the freedoms he represents. As Eleutherios ("the liberator"), his wine, music and ecstatic dance free his followers from self-conscious fear and care, and subvert the oppressive restraints of the powerful. Those who partake of his mysteries are possessed and empowered by the god himself.

The cult of Dionysus is also a "cult of the souls"; his maenads feed the dead through blood-offerings, and he acts as a divine communicant between the living and the dead. He is sometimes categorised as a dying-and-rising god. In Greek mythology, he is presented as a son of Zeus and the mortal Semele, thus semi-divine or heroic: and as son of Zeus and Persephone or Demeter, thus both fully divine, part-chthonic and possibly identical with Iacchus of the Eleusinian Mysteries. Some scholars believe that Dionysus is a syncretism of a local Greek nature deity and a more powerful god from Thrace or Phrygia such as Sabazios or Zalmoxis.

The artist is currently unknown, but we know he was inspired by the works of Praxiteles.

Praxiteles (//etymology: he who finishes his works) of Athens, the son of Cephisodotus the Elder, was the most renowned of the Attic sculptors of the 4th century BC. He was the first to sculpt the nude female form in a life-size statue. While no indubitably attributable sculpture by Praxiteles is extant, numerous copies of his works have survived; several authors, including Pliny the Elder, wrote of his works; and coins engraved with silhouettes of his various famous statuary types from the period still exist.

Some writers have maintained that there were two sculptors of the name Praxiteles. One was a contemporary of Pheidias, and the other his more celebrated grandson. Though the repetition of the same name in every other generation is common in Greece, there is no certain evidence for either position 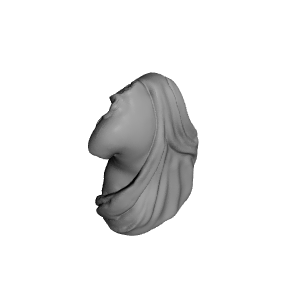