Fragment of Doric frieze with metope and triglyph

3D
Scan The World
1,725 views 34 downloads
Community Prints Add your picture
Be the first to share a picture of this printed object
0 comments

Fragment of Doric frieze with metope and triglyph

In classical architecture, a metope is a rectangular architectural element that fills the space between two triglyphs in a Doric frieze, which is a decorative band of alternating triglyphs and metopes above the architrave of a building of the Doric order. Metopes often had painted or sculptural decoration; the most famous example are the 92 metopes of the Parthenon marbles some of which depict the battle between the Centaurs and the Lapiths. The painting on most metopes has been lost, but sufficient traces remain to allow a close idea of their original appearance.

Triglyph is an architectural term for the vertically channeled tablets of the Doric frieze in classical architecture, so called because of the angular channels in them.The rectangular recessed spaces between the triglyphs on a Doric frieze are called metopes. The raised spaces between the channels themselves (within a triglyph) are called femur in Latin or meros in Greek. In the strict tradition of classical architecture, a set of guttae, the six triangular "pegs" below, always go with a triglyph above (and vice versa), and the pair of features are only found in entablatures of buildings using the Doric order. The absence of the pair effectively converts a building from being in the Doric order to being in the Tuscan order. 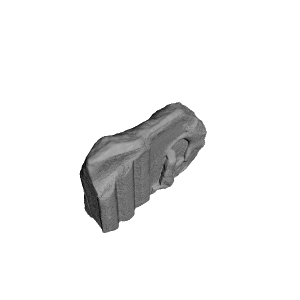