3D
Scan The World
1,875 views 44 downloads
Community Prints Add your picture
Be the first to share a picture of this printed object
0 comments

In Attica, around 580 BC, a series of tall gravestones begins, topped by the figure of a sphinx, on a simply decorated capital. After the mid-century the capital is elaborated as palmettes with spirals, but soon thereafter the stele type is simplified, with a palmette only. The type disppears in the early 5th cent. BC. Most figures are male and there is rough age differentiation by type: young as athlete, mature as warrior, old as man with dog. In the last phase the rectangular bases for the stelai may be decorated in relief on three sides. 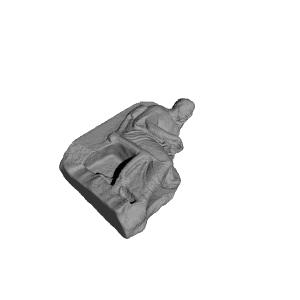 ×
0 collections where you can find Fragment of gravestone, Attic style by Scan The World