Fragmented torso of a man

3D
Scan The World
2,819 views 114 downloads
Community Prints Add your picture
Be the first to share a picture of this printed object
0 comments

Fragmented torso of a man

This torso was created at the turning point between the Archaic and Classical periods and testifies to the radical shift in the representation of the male nude that had taken place by the early fifth century BC. Like the Archaic kouros, the figure is presented frontally, nude, and in a standing position, the left leg advanced. The legacy of sixth-century sculpture is also apparent in the size of the small of the back and the stylized, star-shaped pubic area.

Far from remaining anchored in the style of the preceding era, this torso is a powerful illustration of the achievements of the Early Classical sculptors. The rigidity of the kouros has disappeared, and the anatomical rendering is precise. The viewer is struck by the torso's athletic build, powerful shoulders, and massive proportions. The right scapula juts out, a clear indication that the right arm was extended; it also explains why the torso and pectorals are asymmetrical. The contrapposto stance is accompanied by muscle movement: the weight of the figure is placed on the right leg, freeing the left, thus causing the slight swelling in the flesh to the right of the groin and the undulation in the spinal column. 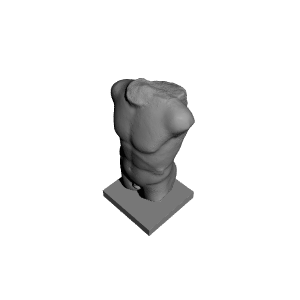