3D
Scan The World
3,163 views 223 downloads
Community Prints Add your picture
Be the first to share a picture of this printed object
0 comments

Francis I Rákóczi was the son of George II Rákóczi, prince of Transylvania, and Zsófia Báthori. He was elected prince by the Transylvanian Diet in 1652, during his father's life. However, because of the disastrous Polish campaign of 1657 and its consequences, the Ottoman Empire removed his father from the throne in 1660, and prohibited any Rákóczi to ascend the Transylvanian throne. This left Francis unable to come by his father's legacy; he therefore withdrew to his estates in Royal Hungary.

Notably, the Rákóczi family was Calvinist, and they were staunch supporters of the Reformed Church in Hungary. However, Francis' mother, Zsófia Báthori, came from a Catholic family, and converted to Calvinism merely for the sake of her marriage. After her husband's death, she returned to Catholicism and become a bulwark of the Counter Reformation in Hungary. Francis Rákóczi also became a Catholic, thus acquiring favour with the Catholic Habsburg Court. He was made a count in 1664.

In 1666 Francis married Jelena Zrinska (Ilona Zrínyi in Hungarian), a Croatian countess, and joined the Wesselényi conspiracy (Zrinski-Frankopan conspiracy in Croatia), one leader of which was Jelena's father, Petar Zrinski(Hungarian: Zrínyi Péter). Francis soon became the leader of the conspiracy, and, as a culmination of their anti-Habsburg stratagems, started an armed uprising of nobles in Upper Hungary, while the other conspirators were supposed to start the fight in Croatia. Due to poor organization and discord between the conspirators, however, the Austrian authorities were well informed; they quickly suppressed the Croatian branch of the revolt.

When Rákóczi learned that Petar Zrinski had been captured by the Austrians, he laid down his arms and applied for mercy. All other leaders of the conspiracy were executed for high treason; Rákóczi, for his mother's merits in the Counter-Reformation, and for a ransom of 300,000 forints and several castles, was pardoned. 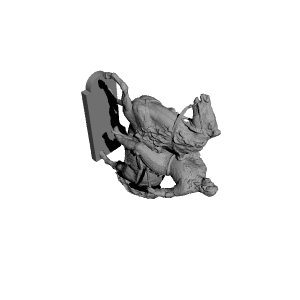 ×
0 collections where you can find Francis II Rákóczi in Szeged, Hungary by Scan The World