3D
Scan The World
1,615 views 136 downloads
1 collection
Community Prints Add your picture
Be the first to share a picture of this printed object
0 comments

Portrait of the 32nd President of the United States (1933-1945) made by Jo Davidson in 1933 and displayed on St. Ann's Square, or Sankt Annæ Plads, in Copenhagen, Denmark. The monument was unveiled on the anniversary of Denmark's liberation on 5 May 1953. The inscriptions on the pillar say:

He fought for
the freedom of the world" 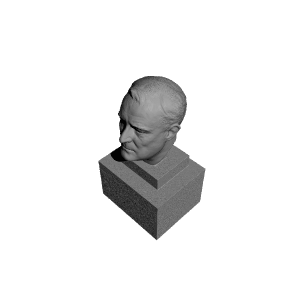 ×
1 collections where you can find Franklin D. Roosevelt by Scan The World