This little square in the middle of Prague's Dusni Street is what the city's famous native, writer Franz Kafka, probably saw each time he looked out of his window. The historic Jewish Quarter in Prague is where Kafka spent most of his life - and often features in his novels and short stories. But despite that, for years there was no permanent memorial to the man who changed the face of 20th century literature. But now, all that has changed.

"I think this location is beautiful. At first, I didn't think about it that way. But later, I realised that maybe there was not a better place than this one."

Scultpor Jaroslav Rona is the author of a bronze memorial to Franz Kafka which was recently installed here in Prague's Dusni, or Holy Spirit Street. He told me that this location, where a Catholic church and a synagogue stand next to each other, has a special significance.

"Because in this neighbourhood of two churches, I mean one church and one synagogue, there is this tension between the two religions. And this is exactly his place, Kafka used to walk around here every day because he lived on the opposite side of the street, at 27 Dusni Street. He walked around every day."

The tall black sculpture represents a headless male figure in a suit with a somewhat smaller figure of Kafka sitting on his shoulders. Jaroslav Rona says he found inspiration for the statue in Kafka's work.

"I read a lot of his things; about him and from him but this one is something very important. I think that in this short story, there is everything from his creation, everything very concentrated. And that's why I chose this basic symbol - a man who jumped another one on the shoulders."

The image of a young man riding on another one's shoulders through the night streets of Prague appears in Franz Kafka's early short story "Description of a Struggle".

Memorial to Franz Kafka"And now - with a flourish, as though it were not the first time - I leapt onto the shoulders of my acquaintance, and by digging my fists into his back I urged him into a trot. But since he stumped forward rather reluctantly and sometimes even stopped, I kicked him in the belly several times with my boots, to make him more lively. It worked and we came fast enough into the interior of a vast but as yet unfinished landscape."

The Prague Jewish Quarter, with its unique historic monuments, attracts hundreds of thousands of tourists all year round. Many of them now stop at the statue to take photos of themselves alongside the famous writer.

Hi, excuse me, do you know who this is?

And what do you think of it?

Which one is Kafka, what do you think?

Woman: "Which one of the two? Well, I read his book, the "Metamorphosis" so I'm trying to think. I don't know that much about him but I assume both."

And what do you think of the statue?

Woman: "Oh, it's beautiful, it's gorgeous. It's very interesting."

Excuse me, do you know who this is?

And which one is Kafka, do you know?

Woman: "It's funny. But I don't understand what it is. I read Kafka but I didn't read this story, unfortunately."

It looks like the statue of Franz Kafka is rapidly becoming another of the Jewish Quarter's tourist attractions. Sculptor Jaroslav Rona says he's keen to gauge the reactions of both foreign tourists and Czech passers-by.

"I have been there many times, well, several times. I don't want people to recognise me but I want to listen to their reactions because for me it's important. Many people come here, groups, and they take pictures. I'm very happy about it."

Eighty years after his death Prague finally has a statue of Franz Kafka. The city has paid some of its debt to the writer, who although born in Prague is probably better known and more studied abroad than in his native country. It's taken years of work to come to fruition, but for Jaroslav Rona, the Kafka statue remains the fulfilment of a life-long dream. 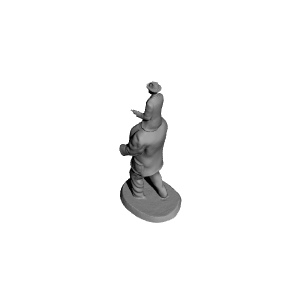 ×
4 collections where you can find Franz Kafka Monument in Prague by Scan The World
×
qp db
@Alkadon_Rinado
0
Printed on: Other
Material: PLA
Posted at: 06th July 2022