3D
1,965 views 48 downloads
1 collection
Community Prints Add your picture
Be the first to share a picture of this printed object
0 comments

Experiments in math art. This is one of a series I created as an LED lamp difuser. This particular model has the dubious effect of confusing the human eye, it doesn't look like anything nature produced and depth perception of the human eye is unusually tested. Can be printed on a standard extrusion 3D printer without support structure, I used a layer thickness of 0.1mm layer height, 28mm/sec, PLA green, one perimeter in vase mode, one base layer of 0.3mm, no top layers. Fan at 70%. Most printers will require full fan. I used a home made rostock delta.  My perimeter was set to 1.2mm thick by setting the nozzle to 1.2mm instead of the 0.75 actual diameter. 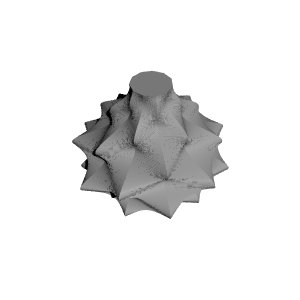 ×
1 collections where you can find Freakle by fluidity