A statue in Montreux, Switzerland (by sculptor Irena Sedlecka) has been erected as a tribute to Mercury. Beginning in 2003, fans from around the world gather in Switzerland annually to pay tribute to the singer as part of the "Freddie Mercury Montreux Memorial Day" on the first weekend of September.The statue itself stands 3 metres high overlooking Lake Geneva and was unveiled on 25 November 1996 by Freddie's father and Montserrat Caballé. A Royal Mail stamp was issued in honour of Mercury as part of the Millennium Stamp series. A plaque was also erected at the site of the family home in Feltham where Mercury and his family moved upon arriving in England in 1964. Others carried tributes to "the" singer of all the time: Robbie Williams and George Michael. In the anime Cromartie High School, a character also named Freddie is based on Mercury in his appearance and rock star qualities.

Freddy Mercury had a second home in the town and was grateful to the local community for respecting his privacy while staying there that he included the community in his will. On their own, the community opted to commemorate him with a statue.

These datasets have been acquired and processed by the students of the Digital 3D Geometry Course taught by Prof. Mark Pauly at the School of Computer and Communication Sciences at EPFL, Switzerland. Please visit http://lgg.epfl.ch/statues for more information 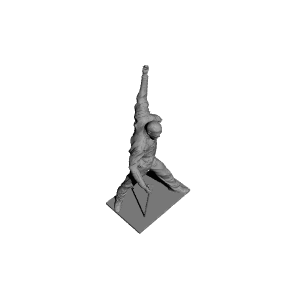