Front face of a sarcophagus

3D
Scan The World
1,520 views 52 downloads
Community Prints Add your picture
Be the first to share a picture of this printed object
0 comments

Front face of a sarcophagus

The first bas relief depicts a mounted rider; the second, a funeral feast; the third relief whose upper portion is curved, a male standing in a frontal position; and the final relief, an adult male and a child.

The legends on the first two reliefs indicate that the individuals are two people, named Rufus and Peison, of Calchedon.

The inscription from the fouth relief states that one of the deceased was fourteen, the other four years of age. The two sailing ships here may be related to the subjects in the final relief. 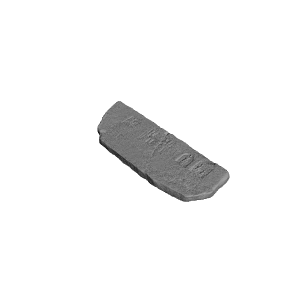