Front relief from a sarcophagus

3D
Scan The World
1,070 views 48 downloads
Community Prints Add your picture
Be the first to share a picture of this printed object
0 comments

Front relief from a sarcophagus

This carved frieze belonged to a sarcophagus bowl. In the centre, Christ, standing, imposes his hands on two baskets of bread presented to him by two disciples. Three other characters, in the background, complete this first group that illustrates a scene in the life of Christ: the multiplication of the loaves. Christ is represented a second time, in profile, touching the eyes of a young blind man that miraculously heals his blindness. In the background, a witness points to Jesus in his left hand and raises his right, as if to accompany his surprise or his words. Turned to the blind, another witness holds a scroll (scroll) and shows a fourth character who makes spring a spring with his wand. The theme is, originally, that of Moses striking the rock of Horeb to quench the thirsty people of Israel. Left is a woman in the attitude of prayer, the palms of her hands turned upward. It is designated by a character who stands to his right. To his left is another man, carrying a volume, who also seems to present the praying girl by placing his arm on his shoulders (?). Finally, in the end, sitting on an armchair, legs crossed, a man puts his left hand on a book and stretches his right arm forward. This is Pierre. Behind him, an individual raises both hands upward. The last character holds a volume and seems to accompany with his right hand the gesture of his neighbour. It is necessary to associate the enthroned personage and the orange. To the latter, an allegory of the soul of the deceased liberated from the body, are destined for that solemn teaching and this supreme knowledge dispensed by Peter or God himself. The reading of the iconography of this sarcophagus in three parts takes a certain coherence: baptism (presence of the source), Eucharist (Multiplication of the loaves), bliss (praying) of the soul delivered by death and introduced to God. 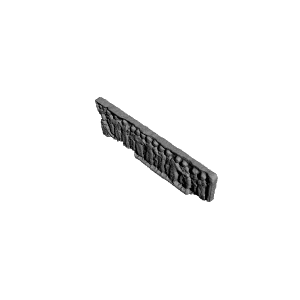