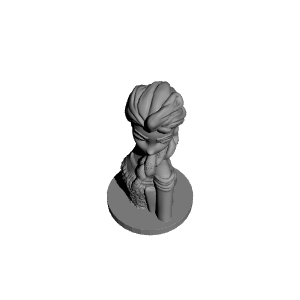 ×
33 collections where you can find Frozen: Elsa Bust by twiesner
×
Prusa master
@Prusa master
4
Printed on: Prusa i3 Complete Kit
Material: Others
Posted at: 22nd September 2016

Came out great on my Anycubic Photon Mono SE. Printed it for my niece who is all about everything Frozen, so thank you for this beautiful model.

Really happy with how this Elsa came out. Sliced it in Cura with the "print speed" set to 100mm/s. No supports, full fan, 15% infill.

Absolutely thrilled with how this turned out. Rainbow silk pla+, 0.12 layer height and 31 hours of printing paid off