3D
360°
Featured Scan The World
2,241 views 76 downloads
Community Prints Add your picture
Be the first to share a picture of this printed object
0 comments

The decoration of the four faces is composed of the following elements made difficult to read by a hammering due to the Christians: a) medallion representing a rider hero (Manes?) Surmounted by the bust of the Sun. Below niche with a bust of the goddess Hecate (?) B) a crown once containing a portrait (?) replaced by a cross; c) an eagle, a crown in its beak and indisctinct figures (a rider and two felines); d) Hermés holding the purse and the caduceus (?).

In the inscription spread over three faces (a-c), the high priest Athanatos Epitynchanos boasts of having received, thanks to his initiation by the high priestess Ispatalé, the gift “to make oracles real”. 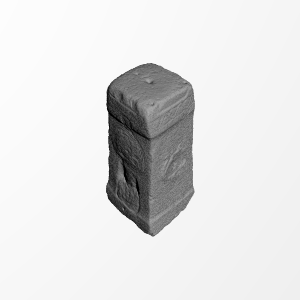 ×
0 collections where you can find Funeral altar (Bômos) by geoffrey.marchal