Unknown provenance. The body of the lekythos is adorned by fluting that ends in a row of ovuli. The top of the front of the vase is occupied by a relief depiction of a naiskos with the figures of two men wearing himatia: the aged man at the left leans on a staff, while the mature, bearded man at the right holds a strigil in his right hand. The bottom part of the staff and the strigil will have been indicated by colour. Both figures are grieving, as is clear from the facial expressions and also from the stance of the aged man, who is probably the deceased. 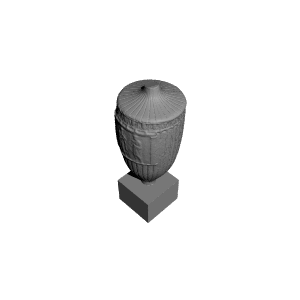