3D
Scan The World
1,931 views 80 downloads
Community Prints Add your picture
Be the first to share a picture of this printed object
0 comments

This is a funerary monument of Alexander von der Mark, depicting the deceased at rest on top of it.

Count Friedrich Wilhelm Moritz Alexander von der Mark (1779 - 1787) was an illegitimate son of King Frederick William II of Prussia and his lover, the Countess Wilhelmine von Lichtenau. After his father's accession to the throne in 1786, he and his sister Marianne were elevated to the rank of nobility  with the title of the house of Mark, who had died out in 1609 and had been inherited by the Prussian Hohenzollerns. It can not be ruled out that Alexander, the half-brother of the later King Friedrich Wilhelm III., was poisoned the following year. Friedrich had Countess Lichtenau arrested and expropriated immediately after the death of his father in 1797. 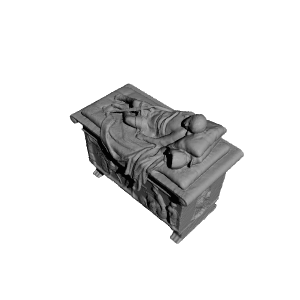