The woman portrayed in the sculpture is Elena Mastiani Brunacci, wife of the deceased Giovan Francesco Mastiani. Elena commissioned the work from Lorenzo Bartolini in 1840, in memory of her husband.
Giovan Francesco Mastiani was one of the richest and most powerful men among the Tuscan families. In particular, during the Napoleonic period he held the post of Subprefect of the Pisan environs and later, for the support he demonstrated during the French occupation, he was decorated by Napoleon with the highly prestigious title of Count of the Empire and in 1812 named Knight of the imperial order de la Réunion and of the same rank as a French citizen. In 1809 Giovan Francesco Mastiani Brunacci accompanied the Grand Duchess Élisa Baciocchi to Paris on the occasion of Napoleon’s marriage to Marie Louise of Austria. 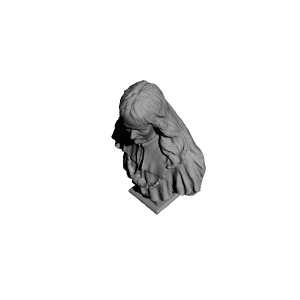 Just wanted to let you know that the downloadable file isn't the sculpture shown in the pictures above, but is of a bust of a man. Keep up the good work.