3D
Scan The World
1,844 views 102 downloads
Community Prints Add your picture
Be the first to share a picture of this printed object
0 comments

Model for the base of the bronze monument (Buenos Aires, de la Recoleta cemetery). 1935, patinated plaster.

Figueroa Alcorta was born in Córdoba as the son of José Figueroa and Teodosia Alcorta. He was elected a National Deputy for Córdoba before becoming Provincial Governor in 1895. In 1898 he returned to the Argentine Congress as a Senator. In 1904 he became Vice-President of Argentina and in 1906 succeeded Manuel Quintana as President. He was an active Freemason.

He is the only Argentine President to date to have held office in - and presided - the three powers of democratic government: Legislative, as Deputy (1892) and Senator (1898); Executive, as President (1906); and Judiciary, as Justice of the Supreme Court (1915) and then President of the same (1929). 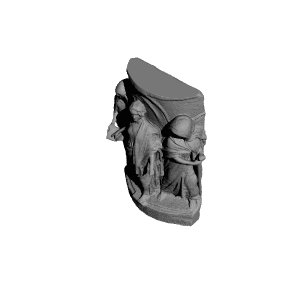