3D
Scan The World
1,105 views 54 downloads
Community Prints Add your picture
Be the first to share a picture of this printed object
0 comments

Funerary naiskos made of Pentelic marble and found in the district of Agios Ioannis Rendis to the N.E. of Piraeus. On the left slab of the imposing monument, is depicted a mature man holding his staff, turning to the right, where there will originally have been other relief figures. His name, Alexos son of Stratokles of Sounion, is incised on the epistyle, along with those of his relatives, Philoumene, daughter of Theoxenos of Marathon, and Phanostrate, and that of his son, Stratokles. The monument is distinguished by the superb rendering of Alexos' facial features and its unusual crowning. 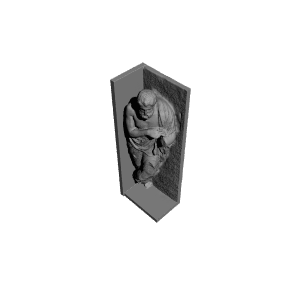