Funerary statue of a Scythian

3D
Scan The World
1,140 views 40 downloads
Community Prints Add your picture
Be the first to share a picture of this printed object
0 comments

Funerary statue of a Scythian

Found in the ancient cemetery of the Kerameikos, Athens. The Scythian, now headless is depicted kneeling on one leg. He wears the characteristic barbarian garment open at the front and tight-fitting trousers. He was probably taking aim, pulling the bowstring with his right hand and holding the bow in his outstretched left; the left hand and left leg are kept in the Kerameikos. Next, to his left thigh can be seen the gorytos (bow and arrow case). Scythian archers were employed by the Athenian state. Therefore the grave enclosure adorned by this statue and bu another statue of Scythian inv. no. 823, probably belonged to an Athenian official. According to another view, the two statues come from the grave enclosure of a foreigner, the 'Persian', inv. no.2728. 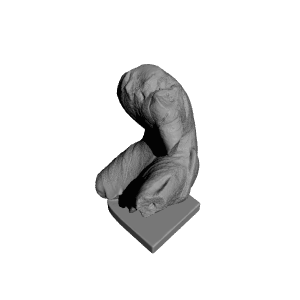