3D
Scan The World
2,323 views 70 downloads
Community Prints Add your picture
Be the first to share a picture of this printed object
0 comments

Stela is a Latin word derived from the Greek stele, which means pillar or vertical tablet. In English, the usual forms are stele and steles. Stelae were erected most frequently as tombstones and as boundary markers, but also as Votive and commemorative monuments. As tombstones, they were originally erected outside the tombs, to mark the offering place and to name the tomb owner. Those traditions hold over into our modern times, with the offerings now most often being replaced with flowers. In temples and sanctuaries, they were set up by individuals to worship the gods, but also to commemorate special events, such as successful expeditions to the mines in the desert or victories over foreign powers. In addition to their funerary and votive uses, stelae were also used as boundary markers for fields, estates, administrative districts or even countries. 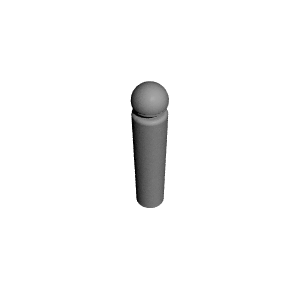 ×
0 collections where you can find Funerary Stele at the Quai Branly, Paris by Quai Branly