3D
360°
Scan The World
1,278 views 37 downloads
1 collection
Community Prints Add your picture
Be the first to share a picture of this printed object
0 comments

This funerary stelewas found during construction work in the via S. Massimo in Padova in 1962. The bas relief scene depicts a chariot racing to the left, drawn by a pair of horses. On the carriage stand three figures: a man, a woman and a charioteer. The latter is easily identifyable by his tunic and gesture of lashing the horses, typical of Roman stelae. The man on the right wears a toga and the faces of both men are also common in Roman funerary stelae.

By contrast, the woman is dressed in a paleovenetian fashion with a symbolic disc on her head and a shawl draped over her and attached by the chest. This could perhaps suggest that the woman is depicted dead. The togaed man, the husband, is looking at her in a gesture of extreme greeting. Udner the horses' hooves is a round shield, perhaps in place of the flower found in ancient Paleovenetian stelae. The subject is common depictions detailing the journey to the underworld.

The inscription on the top right corner of the stele is written in the Venetic language but with Latin characters: the woman's name is composed of a local tradition, Ostiala, in the position of a Latin noble first name, Gallenia. 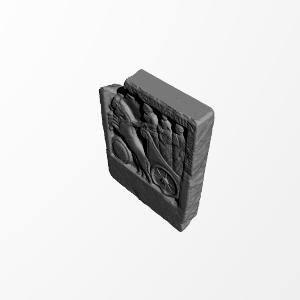