Funerary Stone of The Gladiator Diodoros at the Gallo-Roman Museum, Tongoren, Belgium

3D
Support Free Scan The World
5,407 views 134 downloads
3 collections
Community Prints Add your picture
Be the first to share a picture of this printed object
0 comments

Funerary Stone of The Gladiator Diodoros at the Gallo-Roman Museum, Tongoren, Belgium

The epitaph carved into the base of this high relief reads as follows:

“Here I lie victorious, Diodorus the wretched. After breaking my opponent Demetrius, I did not kill him immediately. But murderous Fate and the cunning treachery of the summa rudis killed me...”

This translation has confused many historians for years. For modern athletes, there is nothing more frustrating than a referee’s blown call. It can cost the player a touchdown or a home run, but in the case of the ancient Roman gladiator Diodorus, it cost him his life. Although Diodorus had, in fact, beaten his opponent Demetrius and taken his sword—the moment depicted on this marble tombstone—the referee intervened, allowing Demetrius to get up and keep fighting, a decision that led to Diordorus’ demise. But was the referee, an official in the arena with the gladiators known as the summa rudis (“chief stick”), within his rights to make this call? Despite their great popularity in the Roman world, surprisingly little is known about the rules of gladiatorial contests. By focusing on the scene and the epitaph together, Roman historian Michael Carter of Brock University thinks he has found rare evidence that there were, in fact, rules that governed the combatants, including the right of the gladiator to submit before he was seriously harmed. The epitaph also makes it clear that the summa rudis was able to intervene in order to interpret the rules. Carter believes that understanding how the contests actually operated is key to understanding how spectators experienced this central social activity. “If this were simply murder on display,” says Carter, “that’s one thing. But since it seems to have been a spectacle of professional gladiators fighting according to established rules and procedures, then that is something quite different.”

Easy to print without support 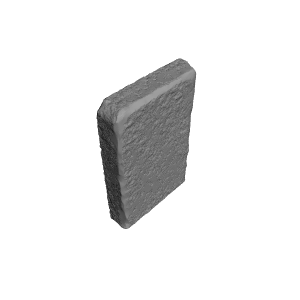 ×
3 collections where you can find Funerary Stone of The Gladiator Diodoros at the Gallo-Roman Museum, Tongoren, Belgium by Scan The World