Funerary Urn of an Ancestor Figure at The British Museum, London

3D
Scan The World
2,887 views 151 downloads
1 collection
Community Prints Add your picture
Be the first to share a picture of this printed object
0 comments

Funerary Urn of an Ancestor Figure at The British Museum, London

Royal ancestor worship was the focus of Zapotec belief and ceremonial practice. Noble men and women were buried in tombs around the central plaza of the Zapotec capital, Monte Alban. The tombs were used repeatedly over many generations. Offerings of burning incense, fresh blood, foaming chocolate and fermented pulque (foaming beverage made of fermented agave) were made to invoke named ancestors. Many of the figures are identified by year signs and name glyphs taken from the Zapotec piye, or 260 day ritual calendar, and displayed on the pendant chest.

The Zapotec civilization was an indigenous pre-Columbian civilization that flourished in the Valley of Oaxaca in Mesoamerica. Archaeological evidence shows that their culture goes back at least 2,500 years. The Zapotec left archaeological evidence at the ancient city of Monte Albán in the form of buildings, ball courts, magnificent tombs and grave goods including finely worked gold jewelry. Monte Albán was one of the first major cities in Mesoamerica and the center of a Zapotec state that dominated much of the territory that today belongs to the Mexican state of Oaxaca. 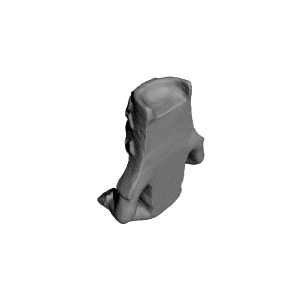 ×
1 collections where you can find Funerary Urn of an Ancestor Figure at The British Museum, London by Scan The World