3D
Scan The World
3,410 views 117 downloads
2 collections
Community Prints Add your picture
Be the first to share a picture of this printed object
0 comments

Gallienus (c. 218 – 268) was Roman Emperor with his father Valerian from 253 to 260 and alone from 260 to 268. He ruled during the Crisis of the Third Century that nearly caused the collapse of the empire. While he won a number of military victories, he was unable to prevent the secession of important provinces.Gallienus was not treated favorably by ancient historians, partly due to the secession of Gaul and Palmyra and his inability to win them back. According to modern scholar Pat Southern, some historians now see him in a more positive light. Gallienus produced some useful reforms.

He contributed to military history as the first to commission primarily cavalry units, theComitatenses, that could be dispatched anywhere in the Empire in short order. This reform arguably created a precedent for the future emperors Diocletian and Constantine I. The biographer Aurelius Victor reports that Gallienus forbade senatorsfrom becoming military commanders. This policy undermined senatorial power, as more reliable equestrian commanders rose to prominence. In Southern's view, these reforms and the decline in senatorial influence not only helped Aurelian to salvage the Empire, but they also make Gallienus one of the emperors most responsible for the creation of the Dominate, along with Septimius Severus, Diocletian, and Constantine I.

Printed by PRINT3Dforum.com Printing Services - Support required. Other than that, pretty straightforward print. You may have to use raft if you use cold bed. 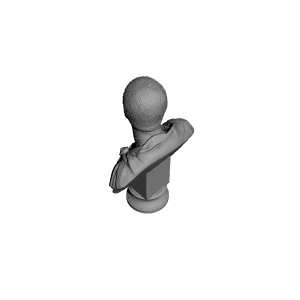 ×
2 collections where you can find Gallienus at The Réunion des Musées Nationaux, Paris by RMN